How Gun Ownership Protects Citizens From An Abusive Government

Although any one armed organization or individual owning an AR-15 would likely have no effect against a government takeover, a coalition of millions of armed civilians standing against an authoritarian regime would have tremendous power. Much like the effect of one vote, one gun will not stop tyranny. But many together can enact change and protect citizens.

History provides many examples of an armed populace keeping its government in check. Peter Leeson, a professor of economics and law at George Mason University, contends that the ownership of longbows among non-nobles likely led to the Magna Carta’s final reissue. Once documents establishing universal rights bound the aristocrats and royals, politics became more stable and monarchs abused power less frequently. Society respected the rights of the lower classes much more broadly.

Stripping people of self-defense is not only a violation of rights, it spits in the face of America’s own beginnings. The American Revolution itself could not have happened without an armed populace. The U.S. Army was outgunned and often outmaneuvered, but Americans aren’t singing “God Save the Queen” before sporting events because individuals had the agency to protect themselves from an overbearing government.

Many more examples of armed civilian resistance to unwanted government authority exist: America’s failure in Vietnam, the 1989 overthrow of Romanian Communist Nicolae Ceausescu, and the ongoing Syrian Civil War, to name a few.

Before Democrats look to new measures of gun control, they should concern themselves with the enforcement of existing gun laws, keeping weapons out of the hands of criminals, and holding accountable institutions and policies which allow threats to go undetected.

If Democrats impede law-abiding Americans from arming themselves to protect their fellow citizens, and themselves, then the only people with access to weapons will be those who purchase them illegally, with criminal intent.

The School Shootings That Weren’t

This spring the U.S. Education Department reported that in the 2015-2016 school year, “nearly 240 schools … reported at least 1 incident involving a school-related shooting.” The number is far higher than most other estimates.

But NPR reached out to every one of those schools repeatedly over the course of three months and found that more than two-thirds of these reported incidents never happened. Child Trends, a nonpartisan nonprofit research organization, assisted NPR in analyzing data from the government’s Civil Rights Data Collection.

We were able to confirm just 11 reported incidents, either directly with schools or through media reports.

Gun Control: What Happened in England, Ireland, and Canada

The first significant modern gun control law in the UK was the Firearms Act of 1920. The Act abolished what had been up until then an assumed right to carry arms.  The Act was likely introduced as an anti-Irish and anti-communist measure, as there was no evidence (then or now) of rising crime at the time. The 1920 act was followed by increasingly restrictive gun control laws in 1937, 1968, and 1988. From the 1950s into the early 2000’s however, the homicide rate grew steadily. 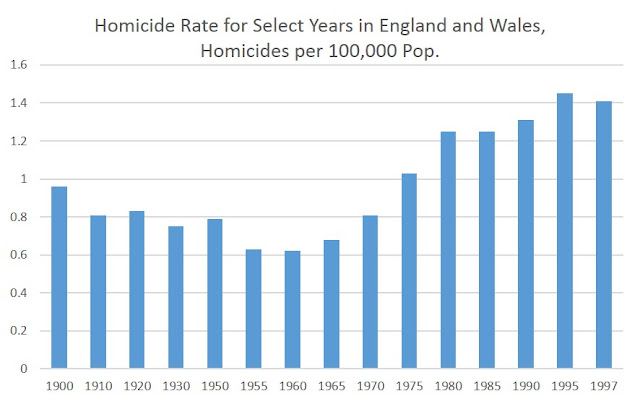 Source: “A Century of Change: Trends in UK Statistics since 1900.”
As I have noted here, the homicide rate had fallen to historic lows in Britain by the 18th century, and continued at low rates in spite of easy access to firearms throughout the 19th century and early 20th century. There is no indication that the homicide rate has been a function of gun control restrictions in the UK, given that the murder rate was higher through most of the 20th century than it had been before the UK began enacting gun control.