Truth is the New Hate Speech

SO this foundation called Data and Society, that is funded entirely by globalists and leftists, the New York Times, George Soros’ Open Society Foundation and many more has come out with a list of guilty-by-association YouTubers, claiming that they are dangerous because they discuss alternative viewpoints from mainstream “liberalism.” (Of course today’s mainstream liberalism actually means globalist communism run by an upper class of unelected technocrats… like in the EU.)

They include a diagram of YouTube personalities and connect them with a bunch of red lines, claiming to map out all of their guest appearances on each other’s shows.

They don’t mention that many of these YouTubers and personalities are usually opposing each other.

They don’t mention that many of these guest appearances were to have a debate between opposing ideas. Very few of these people agree about everything. 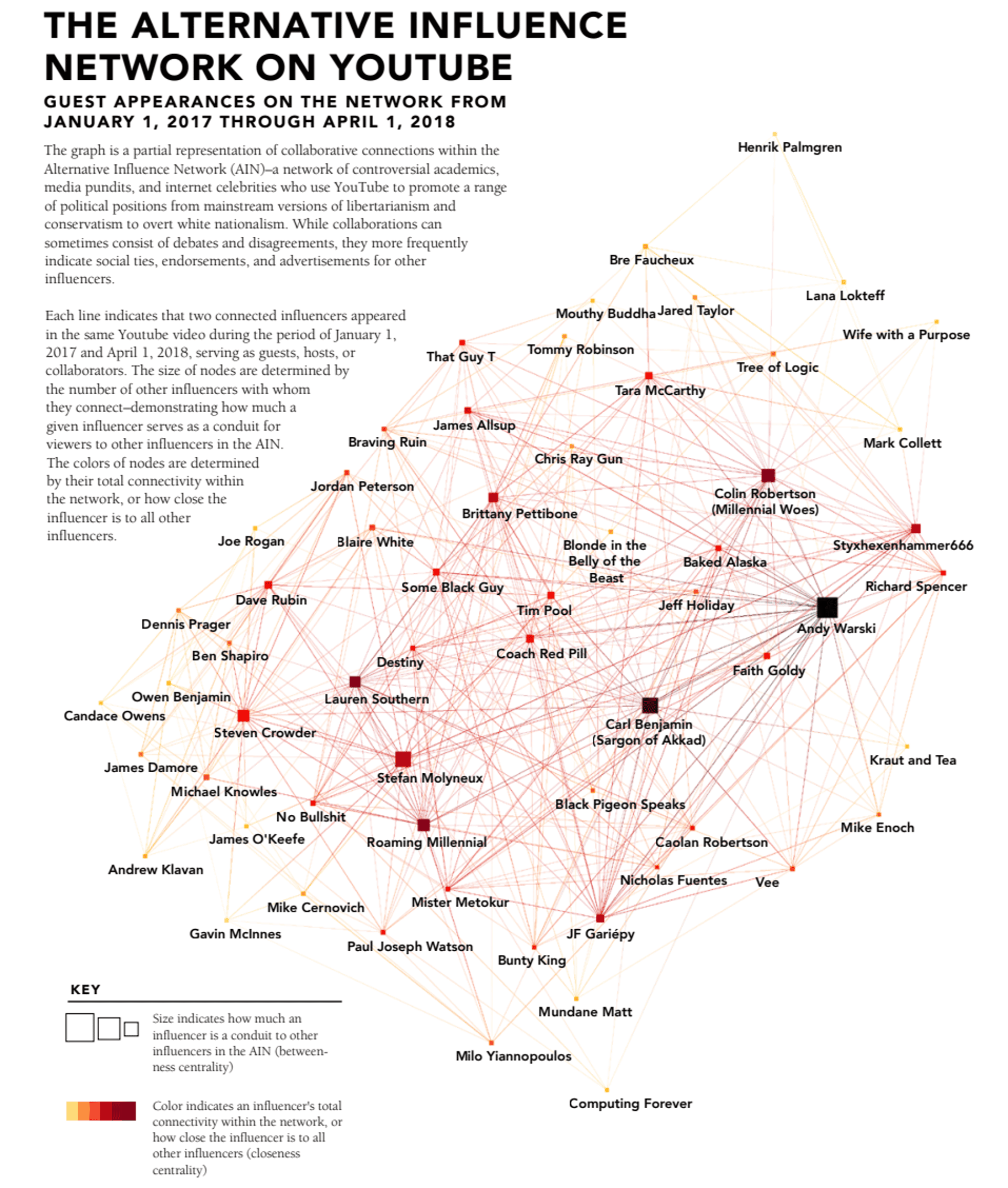 Apparently it’s “extremist” to invite people onto each other’s shows… and debate any views differing from the corporate mainstream.

“the problem is fundamentally linked to the social network of political influencers on the platform and how, like other YouTube influencers, they invite one another on to their shows.”

Apparently, these “influencers” have a wide range of positions, including just plain old conservatism… so they’re not all “dangerous extremists,” but they’re dangerous because they’ve debated with “extremists” on their show.

Or does having any non-liberal viewpoint make someone an extremist?

“promoting a range of rightwing political positions, from mainstream conservatism to overt white nationalism.”

Remember these YouTubers have won in the ratings war, especially since they claim Joe Rogan is one of these dangerous influencers.

And non-leftist and non-globalist views are making a comeback as people realize the lies behind multicultural globalism as an ideology.

Just look again at that list of the people who sponsored this report… the motive is clear, they’re all globalists that want power and profit by exploiting countries and their people.

Any view advocating people’s rights is called “Nationalism” and any view against demographic warfare through mass immigration is called “White Nationalism” or “White Supremacy.”

When did people lose the right to free speech and association?

This is Nineteen-Eighty-Four-level stuff. This is the real world example of Orwell’s Newspeak. They are trying to rewrite reason and logic and debate to all mean dangerous and subversive because it doesn’t agree with their ideology and agenda.

YouTube provides a breeding ground for far-right radicalisation, where people interested in conservative and libertarian ideas are quickly exposed to white nationalist ones, according to a report from Data & Society.

Although YouTube’s recommendation algorithms are partly to blame, the problem is fundamentally linked to the social network of political influencers on the platform and how, like other YouTube influencers, they invite one another on to their shows.

The report describes an “alternative influence network” of about 65 scholars, media pundits and internet celebrities promoting a range of rightwing political positions, from mainstream conservatism to overt white nationalism. They are broadly united by their reactionary position: an opposition to feminism, social justice and leftwing politics and present themselves as an underdog alternative to the mainstream media.

An Open Letter to Olivia Solon

As attentive Corbett Report viewers will already know, The Guardian was the recipient of the highest dishonor of the year this year: The award for “Fakest Fake News Story of the Year 2017” at my First Annual REAL Fake News Awards (aka “the Dinos”). Specifically, the dishonor was bestowed on The Guardian’s San Francisco-based technology reporter, Olivia Solon, for her breathtaking contribution to the annals of establishment fake news hackery, “How Syria’s White Helmets became victims of an online propaganda machine.”

The report, for those who have not read it yet, is as exactly what you would expect from an establishment stenography institution like The Guardian: The so-called “Syrian Civil Defence,” aka the White Helmets, are pure and virtuous; anyone who questions them is an anti-imperialist activist/conspiracy theorist/troll with support from the Russian government; no criticisms of the group are valid and they’ve all been refuted by reputable fact-checkers like Snopes; blah blah blah, etc., etc. As I say, you know exactly how the story goes…but you should read it anyway. It really is a perfect snapshot of the template that the MSM uses to discredit any and all opposition, and it would have been incredible effective…in the 1950s, when people still trusted the mainstream media. (Protip: no one trusts the MSM anymore!)

This being the age of the internet, though, it’s impossible for fake news stories like this to fly with an increasingly informed and connected public. When The Guardian ran its hit piece on the independent researchers like Vanessa Beeley and Eva Bartlett and Tim Anderson, all of whom are countering the mainstream White Helmets / Syria narrative, they simply responded on their own websites and social media and in interviews on independent media sites, probably reaching more people in the process.

One of the highlights of this response came in Eva Bartlett’s rebuttal of The Guardian smear job, “How the Mainstream Media Whitewashed Al-Qaeda and the White Helmets in Syria.” In that report, Bartlett published Olivia Solon’s actual emails to Bartlett when Solon was seeking comment for her article. Stop what you’re doing and read those emails right now.