We couldn’t let 2017 slip away without commenting on the so-called “UFO disclosure” that oozed from the pages of the N.Y. Times on December 16th. Those of us who have followed the UFO conversation for more than 20 years all collectively rolled our eyes. However, for the benefit of those who are new to the party, let us all remember the oft-repeated prophetic warning that was given to Carol Rosin by her boss, Wernher von Braun, back in the mid-1970’s, as copied above.

Many people who are familiar with that “Last Card” quotation have forgotten the whole speech, or rather, the “Other Cards” that preceded it, as shown in this infographic:

Wernher von Braun was a WWII Nazi insider who likely occupied a rank somewhere between “mid-level” and “top-level.” That is, he would have been privy to German classified advanced weapons research, but not high enough up the food chain to warrant a one-way ticket to Spandau Prison where he would be guarded as the sole inhabitant of that prison even when old age would degenerate him into crippled old man. (I speak, of course, of Rudolf Hess and the unexplained threat he posed that justified millions of dollars being spent to maintain his incarceration for decades. But I digress.)

Von Braun was warning that a Fake News wave would overtake us. First, came the Commie Russian threat which was the propaganda du jour during the Cold War Era (and oh how funny that the “Russian” meme made a huge comeback this past year.) Next would come the Terrorist Threat and the Third World migrant invasion. Yup, we’ve seen that, alrighty. Next would come the Asteroid Threat. Check, though not as earth-shattering as the Terrorist Threat. Maybe TPTB opted for “Climate Change” over “Asteroids.” Whatever; it worked out the same. Finally, the last card on the list was dished up to us this month by that Deep State rag, the N.Y. Times, with the publication of a video that shows two Navy F/A-18F fighter jets from the aircraft carrier Nimitz chasing a UFO off the coast of San Diego in 2004.

The Pentagon has acknowledged a secret program to investigate UFOs. It began in 2007 as a pet project of Harry Reid. https://t.co/iW4cksDxfq

The Pentagon has acknowledged a secret program to investigate UFOs. It began in 2007 as a pet project of Harry Reid. http://nyti.ms/2AY9BD3

Immediately, the long-persecuted Tin Foil Hat UFO people proclaimed “Victory!” and “Disclosure!” and popped champagne bottles all the next day. Never mind that there was no confirmation over whether the craft was from “out there” or “in here.” Never mind that the N.Y. Times, the Pentagon, and the Deep State in general exist for the sole purpose of lying to the public all the time. Never mind that Carol Rosin told us there’d be days like this.

A paradigm shift is happening. The first official USG footage of UAP\u2019s are now available to watch on the new TTS Academy community of interest https://t.co/ieyTvzagOj. pic.twitter.com/Pe8VCrEDDH 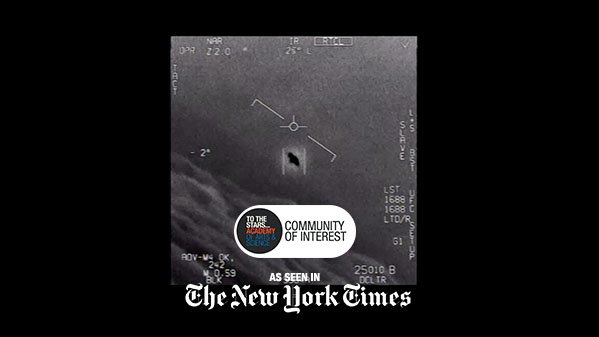 A paradigm shift is happening. The first official USG footage of UAP’s are now available to watch on the new TTS Academy community of interest http://coi.tothestarsacademy.com .

The truth is out there.

A few of us will once again pick up the torture stake and remind the public that if a person has lied to you 99 times, the odds are pretty good that his 100th story will also not be in your best interests. Not to mention the fact that we’ve got a slug like John Podesta trumpeting the news as well.

Indeed, Catherine Austin Fitts was quick to remark to “Dark Journalist” that the “UFO Disclosure” came oddly on the heels of Trump’s announcement that the DoD will finally get audited [linked here]. Ms. Fitts reminded us: “If you’re about to sign a $700 billion budget, with a $56 million increase for the DoD, I can see why you wouldn’t want $21 trillion missing!” With a first-of-its-kind audit looming in the near future, the Deep State has to start coming up with some public excuse for where all the money went. CAF and Dark Journalist will have much more to say on that topic next month.

Interview with Dark Journalist on the latest missing money excuse – “Mommy, mommy, the aliens made me do it!” Why do GS guys need big $ if it is all rigged with gov’t $? https://www.youtube.com/watch?v=00JwQkINIaw …