Gun Control Fails: What Happened in England, Ireland, and Canada

If gun-control advocates want to claim credit for recent declines in homicide rates, they’ll need to explain why they remain blameless for increases in the murder rates that came on the heels of increasing gun controls through much of the 20th century. Of course, in these countries, one could also claim that the lack of sufficiently restrictive gun control was what really caused the increases in homicides mid-century, and that it was the build-up in restrictive laws that finally took effect ten or twenty years ago, thus pushing down homicide rates.

However, this could not be applied to the US where gun ownership has expanded in recent years while homicide rates have fallen.

United States: Homicide Rate Has Collapsed Since the 1970s

Naturally, we should take a look at the US to get a sense of what is happening there during this time period. According to the WHO data, murder rates increased significantly in the United States during the 1960, hitting a peak of 10.5 homicides per 100,000 in 1974. After a series of ups and downs during the 1980s and early 90s, homicides began a significant decline: 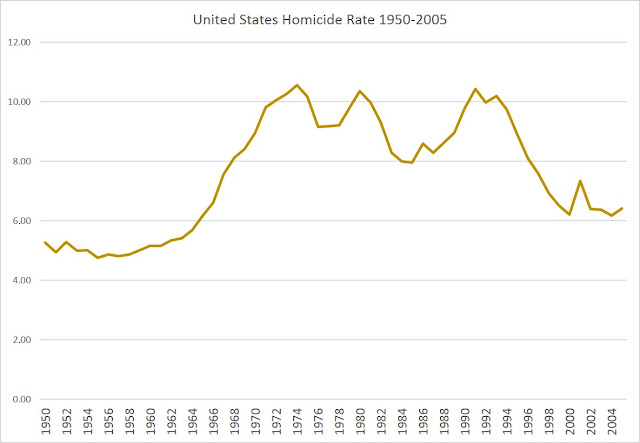 According to the data published by the World Bank, up through 2012, the homicide rate in the US has continued to decline over the past decade, and is now back at 1950s or early 1960s levels: 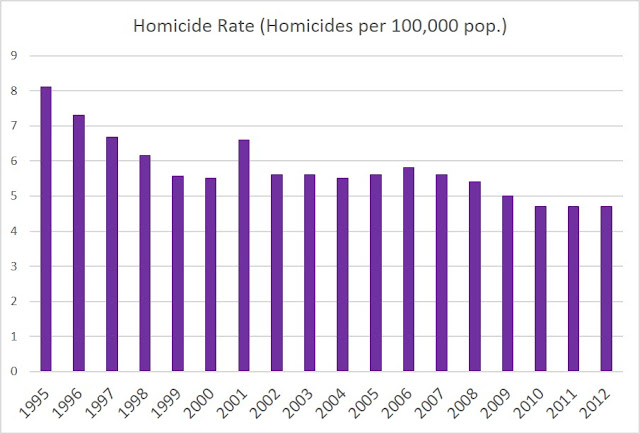 Of course, during this period in the United States, gun ownership rates have exploded, with enormous increases in total gun ownership. I examine gun totals here.

Moreover, the number of conceal carry permits has increased significantly over the past twenty years, and as the Washington Times recently noted:

The homicide rate has steadily declined over this period. Not surprisingly, a 2003 CDC report on gun violence concludes:

The Task Force found insufficient evidence to determine the effectiveness of any of the firearms laws or combinations of laws reviewed on violent outcomes.

And that was before the continued declines in homicides that occurred during the decade following 2003.